Crows On The Road: Jez’s Report

Crows at Beaconsfield SYCOB
Monday 16th September 2013
Result: Beaconsfield SYCOB 2-2 Crows (Mason, Hammond)
Attendance: 63 (35 approx travelling Crows)
The Journey
Your traveller’s tales team left Garden Walk at around 6pm after Kevin managed to rid the pitch of a couple of scallywags trying to impersonate Craig Hammond. For the second time in succession the M25 was good to us and we arrived safely after a McDonalds stop and Simon having the shock of his life at a £1.85 cash point charge at 7.10pm. Unfortunately we had to put up with Ian Collicott (that’s with two T’s by the way) and his list of terrible jokes. I would use the S word but children read this and judging by the quality of said jokes he is obviously aiming them at that market. Simon came out with a more adult one, but cannot be repeated on this website (unless we want it shut down!)
The Ground
Not much has changed in the looks of the ground since our last visit, the car park still resembles a battle zone but the old Snack Bar held within the club house has now closed. I was gutted as the young lass behind the counter use to give me free cheese with my Beaconsfield Burger. This has now been replaced by a Burger Van located in the corner of the ground. More about this later.

The Tea bar at Beaconsfield now gone but not forgotten
The ground itself is neat and tidy with a large covered terrace behind the goal with the main stand located on the left hand side straddling the halfway line. 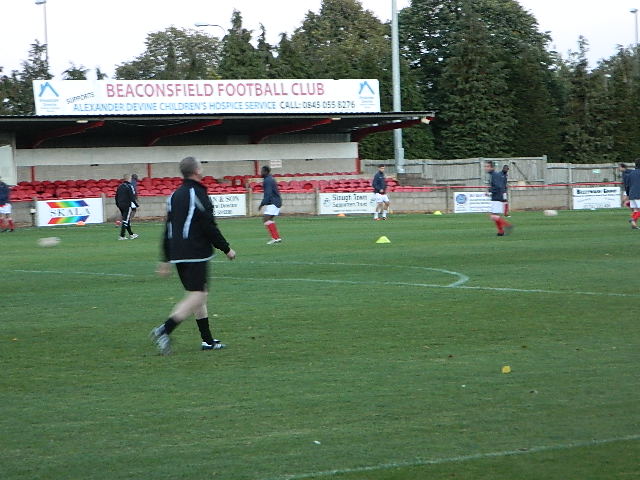 The Main Stand at SYCOB
Opposite the Clubhouse is another expanse of open terracing with a wooden fence behind it to protect whatever was behind from stray balls. No ball boys here, so the players had to retrieve the match balls themselves, it took me back to my childhood days.
To the right of the club house lay more uncovered terracing which housed the dug outs. The majority of fans chose this side to watch the unfolding proceedings.
The pitch looked in excellent condition considering both Beaconsfield and Slough play here.
Apart from the couple of guys selling programmes there is a marked change in attitudes here. Gone are the days of a welcome and a chat about all things non league. The officials were keen to get you in, did not allow you into the club house through the rear entrance and did not allow you to get to the toilet once the metal gates were closed. I was alright, but when you have an aged supporter like Ian, this could be a little tricky and messy.
At the end of the match they were quick to shut the gates, even if you were standing by them and insisted that you exited the ground through the now open rear doors to the clubhouse. This was done in quite a robust way, it seems so sad since our visit last year.
3/10
Food and Drink

It is very sad, but as remarked earlier the old Tea Bar has been replaced by a private Burger bar. The Slough manager that stood next to me remarked on how excellent the burgers were and great value for money. They did indeed look good, but I miss the Beaconsfield burger and especially the lass that served behind the counter.
Mick enjoyed a very questionable sausage and I’ve noticed that since Leighton last season that he always orders food without the bread! 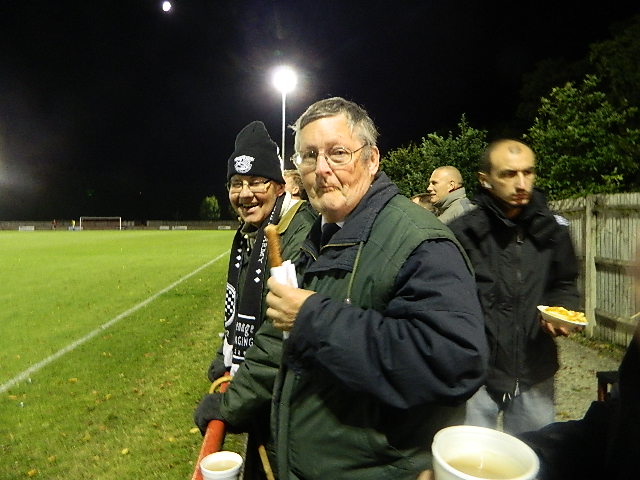 What are you eating Mick?
The tea was terrible and priced at £1.00. It was either the water or the container that was the problem, but it tasted absolutely rank.
4/10
Programme
When initially asked for my precious £2.00 and given a flimsy edition my thoughts turned to a very low score, however I was mistaken. 28 pages of an excellent read with lots of articles and only 5 small adverts. Well done Beaconsfield on showing how to produce a great match day mag.
10/10
State of Toilets
Apart from not being able to get to them before the match, they were pretty clean and tidy. Only thing of note is the old brown towel for drying your hands it still there. Has it ever been washed? I avoided this and used the natural air to dry my nice clean and fresh hands.
8/10
Tannoy System
After our Chesham experience anything would be better and so it proved with the sound of silence. The only time it opened up was to name the teams and the Beaconsfield goal scorers all though this was difficult to hear from our vantage point.
6/10
Home Fans
Fans, what fans? In a crowd of 63 they were outnumbered by the travelling Crows. Not a peep from them except for when they scored and to discuss the sending off. More on that later. Those we did chat to were friendly and keen to discuss our excellent result against Chesham.
I spent the second half talking to the management team of Slough, who were very complimentary about the Crows and their experiences with our fans last season. A real pleasure to chat to them. Could not believe that they are under pressure from their own fans already!
7/10
Crows
About 35 of us made the journey to Beaconsfield and lots of shouts could be heard. Gave the team plenty of encouragement especially after the criminal decision to send young George off. Made their feelings about the official’s performance known too.
10/10
The Game
I’ve got to be a little careful on what I say here, which is why I have left it a couple of days before penning this article, but the match was dominated by the terrible refereeing performance and the decisions he made against both teams. It’s a wonder the match did not descend into chaos and credit must be given to both sides and management for keeping their heads.
The match though was a keenly contested affair with the Crows playing some excellent football with Mitch Bryant heavily involved with some free flowing moves. Both keepers were not tested much in the first half with Beaconsfield looking good on the break. Only real save was made by the home stopper on 44 minutes but I am not sure he knew much about it.
The second half saw Royston press forward with Beaconsfield countering on the break, a close affair it was blown right open by possibly the worst decision I have ever seen in my life. On 60 minutes with Beaconsfield piling into the area an excellent block from Lewis Endacott fell to SYCOB’s Zak Joseph, our young stopper George Lawton made an excellent tackle and unbelievably the referee blew for a penalty. This set the scene for both sides to appeal the decision and full credit must be given to the Beaconsfield Captain who remonstrated with the Ref and nearly earnt himself a second booking. The ref did not communicate with his linesman who himself had not shaken his flag and immediately sent off the distraught youngster. Everyone in the ground concluded that this was an awful decision.
With Lewis Endacott donning the gloves, Beaconsfield took the lead from the resultant penalty. With such a shocking decision you would not have blamed the lads to have fallen apart, but credit to Paul and the entire team they immediately equalised.
With Beaconsfield sensing an opportunity to capitalise against 10 men and an outfield keeper they continued to place pressure on the Royston goal and on 89 minutes took the lead again.
With the Crows running out of time and into the 8th minute of added on time the referee again made another huge error of judgement by blowing for a penalty for a deliberate handball in the SYCOB area. Two things wrong with this, firstly it was not a penalty and secondly if he was consistent he should have sent the opposing player off. Craig Hammond duly dispatched the resultant spot kick and most people in the ground felt justice had been served. 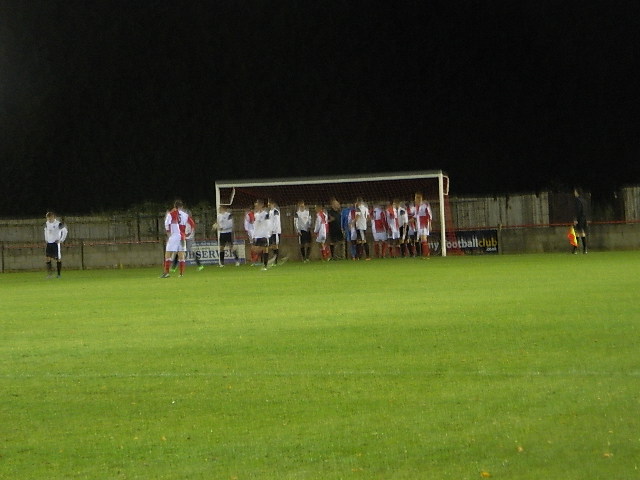 Can you spot a handball?
Physio Watch
Did not see the opposition Physio but Neil Baker from Slough also agreed with me that we have the best physio in the league followed very closely by Uxbridge’s!
Bird watching
None to be seen of either variety, very disappointing this trip.
Man Of The Match
Some brave performances out there, especially in the second half, but the TT team decided on his first half performance that Mitch Bryant played superbly well and was at the heart of everything good about the first half moves.
Honourable mentions to Robbie Mason who won everything in the air, Tom Pepper who snuffed everything out on the left and Joe De La Salle who was a rock at the back.
Special mention to Paul who galvanised his side after the sending off and was calm as those around him nearly lost their heads. 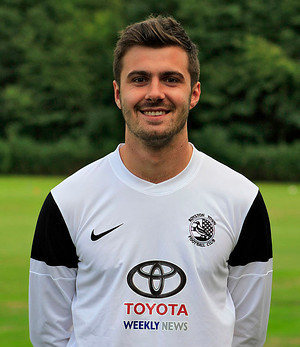 Mitch Bryant: Immense!
Mileage for me so far (Round Trips)
256 so far
Jez Izod (With additional reporting from Ian Collicott with two T’s, Simon and Kevin)

RT @Ollie_Bayliss: Step 3-6 clubs can apply for their share of the £10m of grants from tomorrow. Here's the maximum amounts allowed per cl…
15h

Warning: sprintf(): Too few arguments in /customers/6/3/0/roystontownfc.co.uk/httpd.www/wp-content/themes/victory/functions.php on line 913