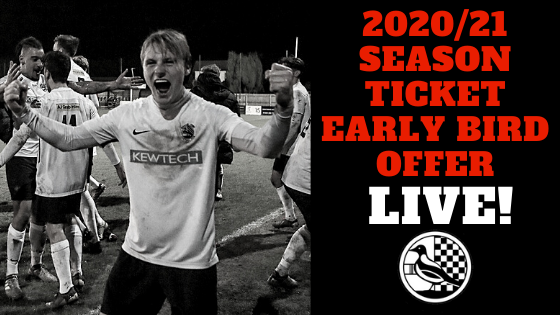 With the exciting and eagerly awaited news that football could soon return we are pleased to announce our 2020/21 Early Bird season ticket offer is now LIVE!

Your season ticket will give you admission to all first-team home league games, as well as reserve and youth team games for 2020/21. If you sign up before the first game of the season then you can make a considerable saving on the normal price.

If you purchased your season ticket on-line last season then you won’t have to re-register as your account is already in place and you can just go ahead and pay for the 2020/21 season ticket HERE at your discounted early bird rate.

If you don’t yet have an account go to the ‘TICKETS’ section at the top of this page and choose the season ticket option and then follow the on-line instructions.  If you are a bit unsure about using the on-line option then application forms are also available from the club.

Many thanks for your continued support!