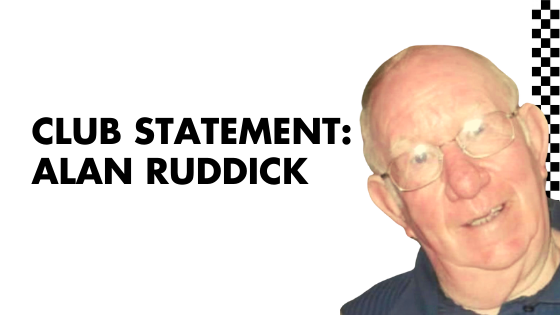 It is with a sense of great sadness that the Club has learned that Alan Ruddick, a truly loyal and long-time supporter of the Crows since he moved to Royston in 1975 passed away as a result of Covid-19 and pneumonia last Friday at the age of 76.

Alan was a ‘salt of the earth’ type of man who was never short of making his views known especially about how the team were playing and how the Club was being managed. This certainly showed just how important his local club was to him and is something which is underlined by the request made by his daughter Paula and son Steve that any donations to commemorate his life should be made to Royston Town Football Club. Alan’s funeral will be held on Monday 15th February.

From everyone at the Club, I would like to offer our sincere condolences to Alan’s family and friends. He will be sorely missed by the many who knew him at Garden Walk