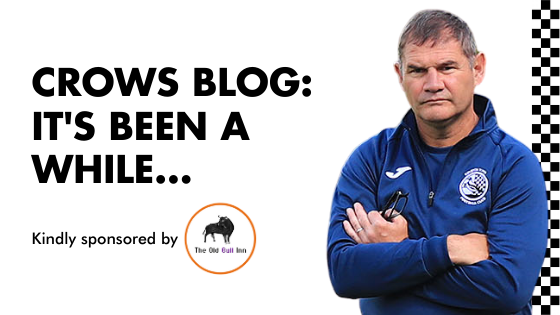 CROWS BLOG: IT’S BEEN A WHILE…

CROWS BLOG: IT’S BEEN A WHILE…

It’s been a while since I written a blog post but now I have a game to report on which in itself is unusual!

First of all, I hope all’s well with everyone?

As I’m sure you are aware our League campaign has been delayed again. Hopefully, we can get up and get going again as soon as possible but at the moment, we can train and prepare for the FA Trophy but little else!

It is what it is and it’s obviously no one’s fault but I do feel that football at our level and the one below is being treated the most harshly out of all the clubs in the Country!

Anyway, on to last night’s game and a massive well done to all the players! Quite simply they were awesome! And by all the players I mean both sets of players! Tamworth are in the same situation as us and suffering. All the lads out there last night were committed and put on a good show especially considering the current circumstances! Yes, there were mistakes from both sides but generally, the fitness levels that both sets of players showed was amazing!

So now we push on in the Trophy which is great news on all fronts. We can now have a definite purpose for coming to training. The next round comes around very quickly –  I believe it’s next week. At the time of writing, we don’t know who our opponents will be. Obviously. a home draw is always favourable but especially this time I would like a team from our level or lower so at least that way they have had the break like us and we all start on an even playing field.

As I’ve said we are in very strange times and for me, it’s about dealing with these situations as best you can but at the same time realising that you can’t get it perfectly right! The players generally have been brilliant – their fitness levels are there to see as is their enthusiasm and attitude. On the management side, we are aware not to ‘overload’ them too much and, probably most importantly, we’ll get led by them with the amount of training/games we can put them through in such a small space of time!

Hopefully, we can keep progressing in the FA Trophy and that the League comes back as soon as possible, I know we have all missed it!!