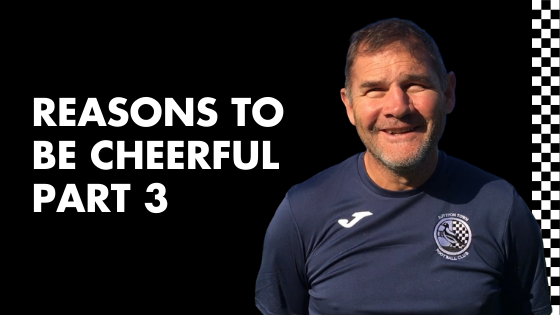 Rather than my usual blog posts, I’m sending you all a Xmas message on behalf of the players and staff to wish everyone a Happy Christmas and a healthy New Year!

I think I speak for everyone when I say – Roll on next year eh?

Looking back on this year from a football perspective, we went into 2020 in a very strong position. The players were absolutely flying!! We were competing strongly in the League, although due to our excellent cup run we were a few games behind most teams. We all thought that we’d win those matches thereby putting ourselves in a great position to go on and possibly win the title! I think worse ways we would have ended up in a playoff place but all along our aim was to win the League!

At the start of the year, as you all know, we were still in the FA Trophy and competing in the League. The biggest compliment I can give all the players was their attitude and desire in every match! We could have had the scenario that with us still being in the Trophy that we would have tried to ‘save’ ourselves in the League games. But no, the boys went for it every week! All of them were committed in every game, hitting brilliant performance levels week in and week out. That was my particular high but then as we all know the pandemic hit – League null and void, no football and the season finished!

At this point, I don’t want people to think that I’m being heartless by just talking about the football side of things. This period of time has been devastating for so many and I don’t want to disrespect anyone that suffered any hardship throughout this difficult year.

However, I do want to bring things back to a positive note and the way that EVERYONE at the club has reacted to the situation. Firstly the players! Yes, we lost a few, Claudio Ofosu to Hartlepool, Matt Bateman to Hemel Hempstead, Luke Warner-Eley to St. Alban’s and of course the retirement of Ben Martin. Would they have all stayed if we had gone up? Possibly,  but I’d rather concentrate on the boys that have stayed. Generally, they kept themselves fit and when we did get the green light to start again, they came back enthusiastic and ready to get on with things.

Secondly, I must compliment all of you Crows fans! The support has been truly amazing, the fundraising, the matchday help and so much more. The community has really pulled together and it’s been brilliant and so inspiring to witness. The new season hasn’t started perfectly for us but losing only 1 League match isn’t the worst start in the world. Yes, probably drawing too many could be a slight negative. I did feel that considering all the chaos we’ve endured that we were slowly getting on the right track, only to be locked down once more! Frustrating is not a strong enough term, this is unbelievable. When we will start back is anybody’s guess and like all the teams at our level, we have to wait for guidance. Anyway, here’s hoping that we get back to some sort of normal quickly.

I know that it’s going to be a bit different for everyone this year but try to have a great Xmas and please keep safe.