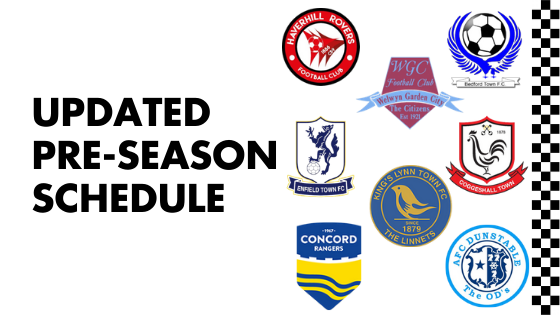 Our pre-season fixture schedule has now been updated.

The planned HOME pre-season friendly against Cheshunt on Saturday 12th September has been postponed as our 2020/21 FA Cup journey will begin. We were one of 13 Step 3 clubs to have been drawn to play in the Preliminary Round rather than the later First Qualifying Round. We will discover our opponents when the draw is announced on August 18th.

The revised fixtures are shown below.

Unfortunately, until such time that Government advice changes, all pre-season games will be played behind closed doors. Should this change we will, of course,  provide further information to supporters.

FIXTURE UPDATE: Our HOME fixture on Monday 27th December versus @HitchinTownFC will kick off at 1PM #A505Derby… https://t.co/VNfNgyGKGP
19h