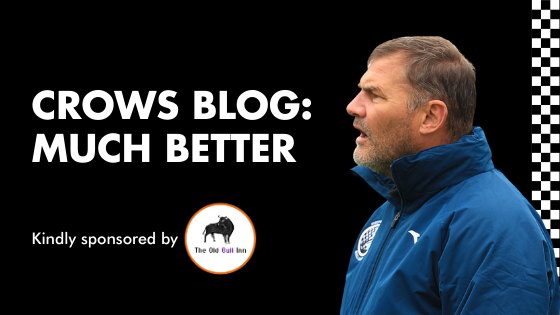 A 1-1 draw to comment on tonight against a tough Tamworth team. A draw that was probably about right with not many real clear cut chances created from both sides but in regards to possession, we definitely had the edge so ultimately a little disappointed it was, yet again, just the one point.

Generally, it was a much better performance, we were on the front foot and took the game to them but our Achilles heel at the moment is our quality in the final third and unfortunately, our deficiency in this department is not killing games off and always giving the opposition a chance to equalise. It will come, of that much I’m sure. We’ll keep working on it but confidence and further good play will get us better in this department.  I was a lot happier in that we got about things today. We were brave and played some really good stuff at times. It hasn’t been all plain sailing by any means this season but our lowly League position doesn’t tell the whole story, we certainly haven’t been that bad but not getting the wins always puts you under a bit more pressure to get 3 points.

Going to Tamworth, normally getting a draw would have been more than satisfactory but because we have had plenty of draws previously, to get us back on track a win was what we all wanted but as long as we continue to get performance levels as high as they were today then we’ll be alright.

Finally, best of luck to Endo and the Women’s team in their FA Cup game against Stevenage today and of course, good luck to Dan and his U18s in their FA Youth Cup against Dorking Wanderers on Tuesday.