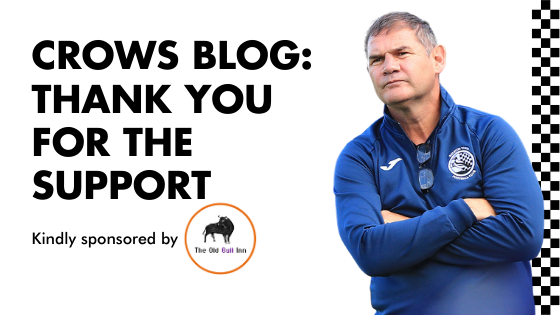 CROWS BLOG: THANK YOU FOR THE SUPPORT!

Firstly, a massive thank you for the guys and girls that came down to watch our cup tie last night.  Sadly it wasn’t to be. What ended up as a resounding defeat really masked an indifferent performance by us, one that maybe with a bit of luck could have easily gone to penalties if it wasn’t for a fantastic save by their keeper. But it was also a performance that we really didn’t get going as a team or individually.

These indifferent performances are a regular thing this season, we’ve been playing okay in patches but generally making far too many mistakes in vital areas and ultimately not putting in a consistent 90 minute performance! The message from the staff has been very clear – go back to basics, keep things simple and win your individual battles.

Football always has a tendency to ‘bring you down to Earth’ and the next run of matches are really important for us. First up is a really tough away fixture in the League against title favourites Tamworth, then we have a home game against Hednesford Town, another ‘high flyer’ in our league.

As said before, right now we all need to stick together, grind out results and build our confidence up once more. The heights we achieved last season were massive but that’s gone now and is in the past. We ALL need to move on and stop feeling sorry for ourselves. The club has pushed forward in stature, in my opinion, mainly down to the excellent exploits and performances of all the Senior teams – Under 18’s, Reserves and the First Team. We (the First Team) have had an incredible period but now it’s time to roll our sleeves up and show some fight. I mention the other senior teams because I had the pleasure of watching the Reserves on Tuesday night and I witnessed a convincing victory.  I also want to say how well the Under 18’s are doing as well. I’m looking at attending the next round of their FA Youth Cup tie away at Dorking Wanderers next Tuesday, another great effort from the young lads.

And lastly but by no means least the Ladies FA cup game last Sunday needs to be spoken about. I popped up to Garden Walk and witnessed a very positive display by the girls. It was a resounding 8-0 win and they played some really good football. So it’s not all ‘doom and gloom’ but us as a First Team, we need to get back to leading the way and I’m sure that we will very soon!