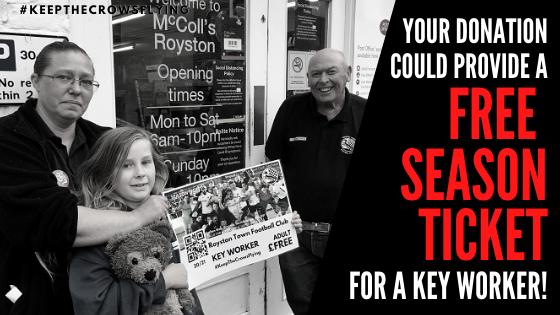 As part of our current crowdfunding campaign to help plug the gap in the lost revenues caused by the current COVID-19 pandemic, Royston Town Football Club are donating a free season ticket to a local key worker for every £1000 raised. To date, the club has raised in excess of £10,000 meaning that at least 10 season tickets will be given away to key workers from the Royston area.

The first lucky recipient was Karen Collins who works in the McColl’s convenience store on Queens Road. Club President Alan Barlow presented Karen with her season ticket and praised her efforts during the current crisis

“Karen has worked tirelessly during this incredibly difficult time ensuring that the shelves are stocked, newspapers delivered and has kept in contact with many of the shop’s most vulnerable customers often delivering their shopping to them. Karen has somehow managed to do this alongside being a full-time mum to 2 kids and the challenges that home-schooling them has brought along with carrying for her own mother. All the while keeping a broad smile on her face! We are proud to present Karen with this small token of the Club’s appreciation of her efforts and look forward to welcoming her and her family to Garden Walk when the new season kicks off!”

“Being a keyworker during lockdown has been hard and I know that others have had it a lot harder though. There have been so many changes, challenges and struggles especially trying to be a full-time mum, a teacher and working full time. On a personal level, its been tough not being able to spend too much time with my partners who works shifts and so, like others I’m sure, we only see each other to hand over the kids! McColl’s have been fantastic and very flexible and I’d like to say thanks to them for their help and support during this time. Many of our customers have been shielding or self-isolating and I’ve really missed them but we do try and keep in touch with them wherever possible.”

She continues “I’ve followed the Crows for a number of years but up until last season I’d never actually managed to get to a game. In fact, my first game was the clubs 3-0 victory over Chester in the FA Trophy last season. My son has had a growing love for football and I finally took him to Garden Walk. As he has additional needs it was always a worry as to how it would work out but he, and I, loved it! My daughter was a little put out that she missed out on that game and so I took her to the Reserve game the following week and now we are all hooked! I can’t wait to get back to Garden Walk and cheer on the Crows and I’d like to thank everyone at the club for this very kind and unexpected gesture”

The ‘Keep The Crows Flying’ crowdfunding campaign runs until 24th June and the club are hoping to raise £20,000. If you’d like to donate, then please visit: 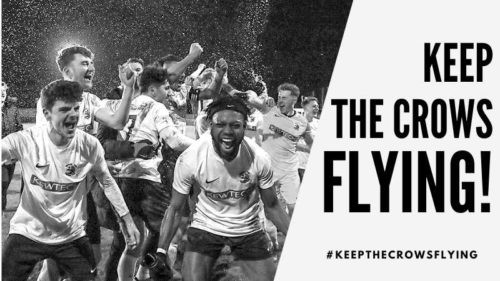