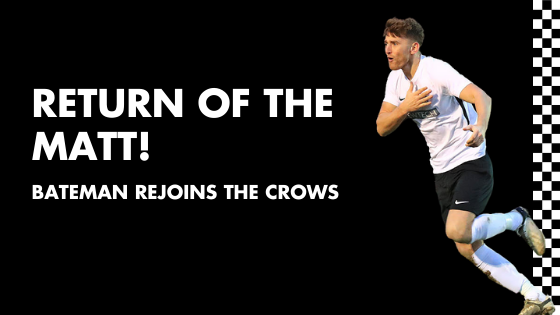 RETURN OF THE MATT: BATEMAN REJOINS THE CROWS

Royston Town FC are delighted to announce the signing of Matt Bateman from Hemel Hempstead Town FC for an undisclosed fee.

Matt was an integral part of the Crows successful 2019/20 season, scoring an impressive 24 goals in 41 games to help the team to the Quarter Finals of the FA Trophy and challenging for promotion before the season was prematurely curtailed due to Covid-19.

An offer at the start of the 2020/21 season from his home town club and National League South side Hemel Hempstead Town FC saw Matt move on. However, a disrupted stop-start season saw him struggle to truly establish himself in the side and this opened the door for an approach.

Chairman Steve Jackson said “Matt was an exceptional and hugely popular player for us so when the opportunity to get him back arose it was a no brainer to open talks. Whilst he didn’t reach the heights at Hemel that we know he is capable of and what he brings to the team. This is a massive signing for the Club and I’m pleased to welcome him back to Garden Walk”.

Matt commented “Leaving Royston a year ago was a really tough decision but the chance to play for my home town club and at a higher level was just too tempting to turn down. Unfortunately, things didn’t quite work out as I would have hoped at Hemel but I didn’t want to regret not taking the opportunity. My season at Royston was the most enjoyable I have ever had, it’s a great club from the board to the fans and the volunteers. I cannot wait to get back playing at Garden Walk again”.

Manager Steve Castle added “Matty is a fantastic lad both on and off the pitch. His attitude is top-notch and he always gives me 100%. He adds another dimension to our game and I am sure that he will soon be back doing what he is best at”

Matt goes straight into the squad for tonight’s game against Millwall U23s at Garden Walk (Kick Off 7.15pm).