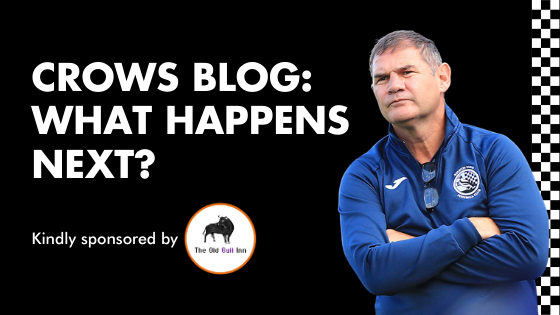 CROWS BLOG: WHAT HAPPENS NEXT?

CROWS BLOG: WHAT HAPPENS NEXT?

Firstly an explanation for my absence on Saturday. No, it wasn’t because it was raining but due to rules of Covid.  I am due to have a procedure on my ankle on Tuesday morning. It’s a simple op but for some reason, they want to do it in theatre conditions. Because of that, the hospital insisted I had to self isolate after I had a Covid test which was on Saturday morning. A bit over the top maybe but in following the rules I reluctantly had to miss our FA Trophy game against Hythe Town. I absolutely hated not being there but as always when I’m absent, I’m always confident of the abilities of our staff to cover my absence sufficiently. It goes without saying that I’m very pleased with the win and on this occasion, I can’t comment on anything but delighted that we are through to the next round – whenever that may be!

Obviously, the most pressing topic of conversation at this moment is the imminent lockdown and how it will affect our level of football. At this moment in time, I personally don’t know enough yet but I will be having conversations with the club and see how we will move forward. It’s a difficult time for everyone but we all have to do our bit. Let’s hope it’s just the month off and we can finish the League. It’s already been mentioned that we have to make a choice our preference of ‘null and void’ or ‘points per game (PPG)’. Personally, if I was asked the I’d say that there’s not been enough matches played this season to use the PPG method. PPG could, and maybe should, have been used last season as there was less than a third of the games left to be played. But to do it now would be, in my opinion, ridiculous.

I do feel for the powers that be, it must be so hard to come up with a plan but let’s hope we can get back playing soon. We did have one scheduled game left before the lockdown was enforced but unfortunately that has now been postponed. Obviously, this is disappointing to you guys, the fans, but it’s also disappointing to us as staff and as a team. I know the players were looking forward to playing on Tuesday night and they were determined to keep our recent good run of form going. Hopefully, we can all get back to Garden Walk as soon as possible but until then please stay safe.

Finally, I want to pass my commiserations on to our Women’s side who unfortunately were knocked out of the FA Cup on Sunday. They’ve had a great run this season and to lose on penalties is never easy. However, they should take heart and pride in fighting back from 3-0 down away from home to take the game to the lottery of a penalty shoot out! Well done girls!